Employers and employees need to take accountability for workplace mental health in order to end the stigma which surrounds the issue, delegates at a major safety and health conference heard today.

Geoff McDonald, a global advocate, campaigner and consultant on workplace mental health, said it is crucial that workers feel they can “put their hands up and ask for help” if they are suffering from a mental health problem.

Speaking at IOSH 2017, the Institution of Occupational Safety and Health’s (IOSH) annual conference, he said line managers need to be able to have conversations with staff, adding there has to be trust to be able to talk openly about the subject.

Geoff spoke about his own battle with anxiety-fuelled depression, saying he had some “very dark moments” and that being able to talk openly about it helped him to get through it. He also referred to a close friend who took his own life.

He said: “Why in 2017, when we have put people on the moon, can we still not openly talk about our mental health at work? 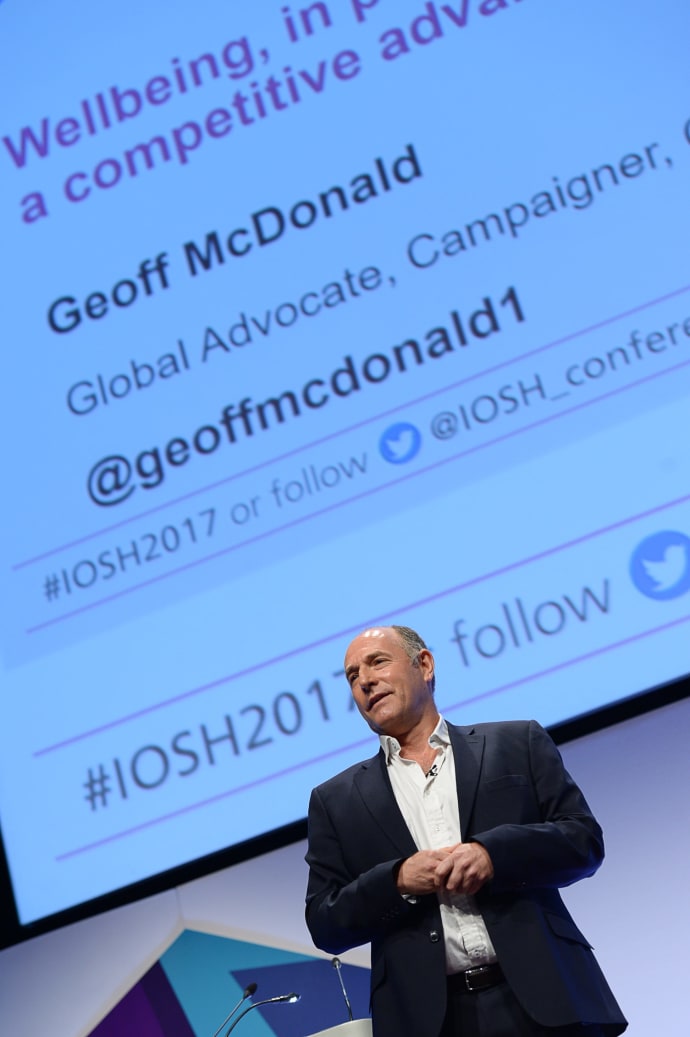 “I want everyone in workplaces all over the world to feel that they genuinely have the choice to put their hand up and ask for help if they are suffering from depression, anxiety or bipolar, just as they would if they were suffering from a physical illness.

“Stigma killed my friend. If he had been suffering from a physical illness he would have put his hand up and asked for help. If my friend had that choice he may still be here today.”

Workplace mental health has been a widely-discussed topic recently. The government-commissioned Stevenson-Farmer review revealed the extent of the issue in the UK, estimating poor mental health costs the economy £99 billion.

Geoff focused in on people’s energy, which he described as the “most limiting resource” within organisations and something business leaders should be looking to enhance.

He said that energy is driven by people’s physical, emotional and mental health along with their sense of purpose.

He said: “People are frazzled. What have we done to the workplace to sap the energy out of people? Why don’t we have workplaces where we are talking about enhancing the energy of people, not making them resilient and throwing more at them?

“We can have knowledge, skills and behaviours but if we don’t have energy, we cannot perform.”

Geoff said that while “great work” had been done in improving workplace safety, it is time to do the same with health and wellbeing, including gaining engagement from business leaders, upskilling people on spotting the signs of poor mental health and how to treat it, and shifting the narrative. This, he said, will create workplaces where people are comfortable talking about mental health.

He said: “If a flower doesn’t bloom, there is nothing wrong with the flower. It is the environment in which it lives.”

IOSH recently released research on returning to work after suffering from common mental disorders. It can be viewed here. Guidance for employers is available in its occupational health toolkit.