How to Prevent Fire Extinguisher and Exit Door Misuse

The Exit Stopper® is a unique and highly effective way to alert you to any unauthorised exits or entries though emergency exit and fire doors, it also serves as an inexpensive security device and helps to prevent theft. The virtually indestructible UV-stabilised polycarbonate housing provides an explicit visible deterrent. 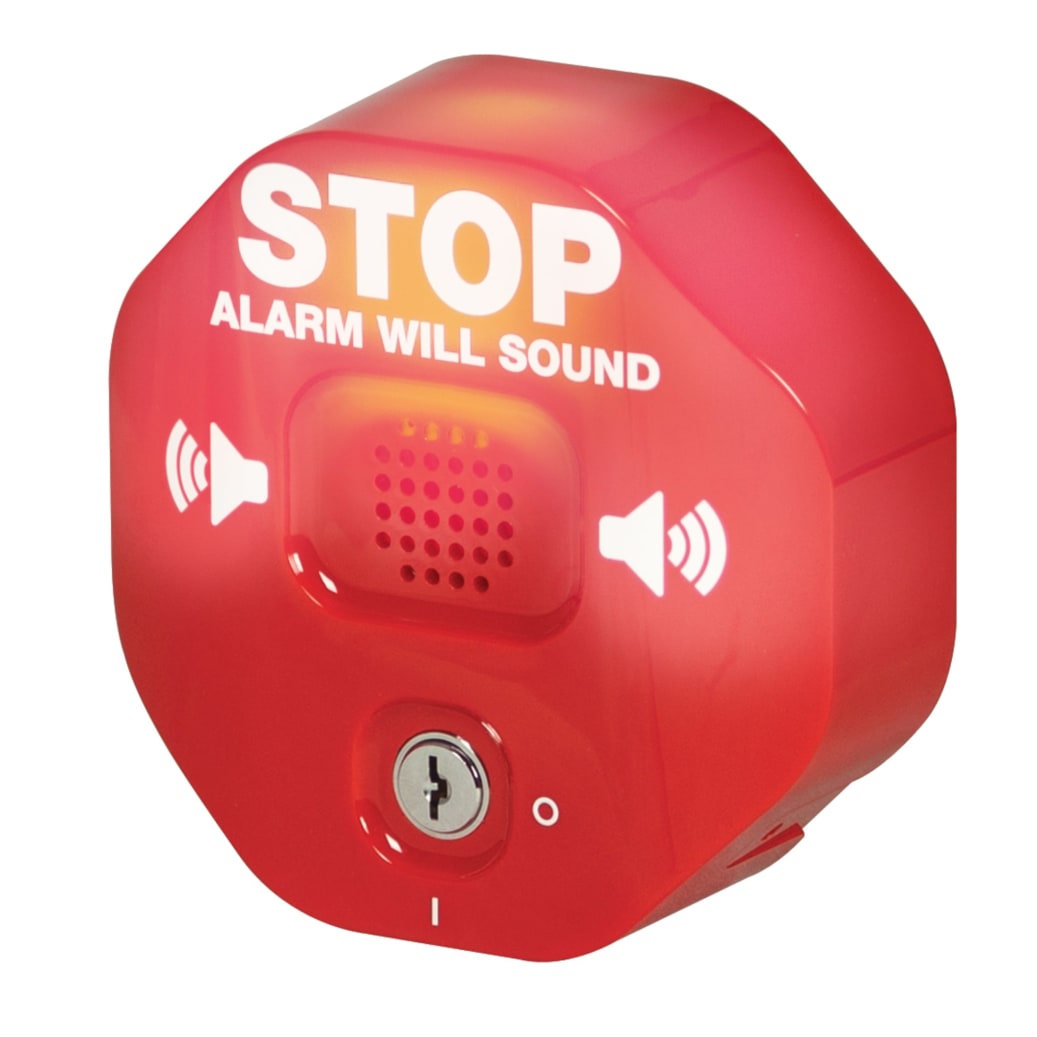 Fire doors need to be closed in order to stop the spread of smoke and fire, however it is worryingly common for fire doors to be dangerously held ajar with 64% of premises visited by the Fire Service having their fire doors wedged open – universities halls of residence, hotels and residential homes are among the worst offenders.

If you prop open a fire door and it is seen to put lives at risk you could suffer large fines, have your insurance void, or even face a prison sentence. In May 2010, a Norwich landlord was fined and jailed after a tenant almost died in a blaze, it was the third time Mike Billings had been prosecuted for breaching fire and health and safety laws – which included wedging open fire doors.

If the protected door is opened, the electronic Exit Stopper will emit a powerful 95/105 dB warning alarm. Once the door is closed a number of reset options are available including an automatic silence function, this feature is particularly useful for fire doors that are in regular use but are at risk of misuse. A key for authorised personnel can be used to override the alarm.

“fire doors need to be closed in order to stop the spread of smoke and fire, however it is worryingly common for fire doors to be dangerously held ajar”

With multiple fitting options, the versatile Exit Stopper can protect single or double doors with any style of door mounting, the device can be installed and protecting your doors within minutes. Units are available in red or green.

The Exit Stopper is available with STI protocol wireless technology enabling wireless monitoring of exit doors that are fitted with the unit. Transmitters are fitted into each of the devices allowing for remote monitoring via a small wireless receiver. 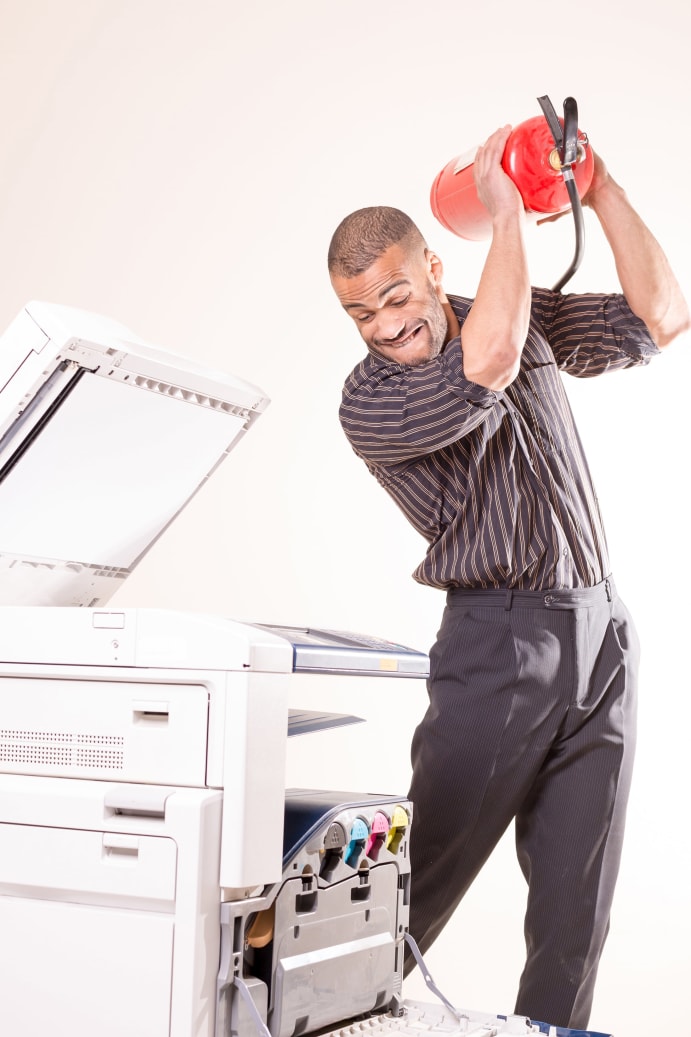 A number of new features were introduced in 2018 that have further enhanced the Exit Stopper. Alongside the audible warning alarm, all models are supplied with a visual flashing beacon. Universal sound symbols and ‘on and off’ function marks have been added for worldwide recognition.

The upgrade includes a low battery indicator and dual language warning instructions. While all models will still be supplied with English; the housing of the unit has been updated to create space for one of 21 additional language labels to be installed, allowing one model to be used globally.

It is often advised that fire extinguishers should be either mounted to a wall or placed in a stand in order to discourage people from moving them around. However, this advice is regularly ignored with extinguishers commonly used to prop open exit and fire doors due to their frequent close proximity.

Required by the Regulatory Reform (Fire Safety) Order 2005, appropriate fire-fighting equipment must be provided where there is any risk of fire, with a responsible person in charge of maintaining a fire management plan. Should a fire extinguisher be found missing you could find that your insurance will not pay out in the event of an incident.

Fire extinguishers are also prone to theft and when discharged unnecessarily pose a risk, both to the environment, and nearby persons: ‘fumes from CO2 extinguishers can asphyxiate’, and powder extinguishers have the potential ‘to impair vision’.

The Health and Safety at Work etc. Act 1974 makes the misuse of an extinguisher in the work place an offence for which someone can be criminally prosecuted, stating in Section 8: “No person shall intentionally or recklessly interfere with or misuse anything provided in the interests of health, safety or welfare in pursuance of any of the relevant statutory provisions.”

In 2017, a Belfast teenager was handed a suspended jail sentence for stealing a fire extinguisher, with the Judge commenting: “The theft of a fire extinguisher is in my mind the equivalent to the theft of a life buoy in that it put life at risk.” The Theft Stopper® can be used alongside the Exit Stopper to put a stop to this potentially lethal misuse of life safety equipment.

The Theft Stopper is a sturdy, tamperproof, self-contained device which prevents the theft, misuse and vandalism of fire extinguishers. Strong PVC coated metal rope wraps around the neck of the extinguisher and when removed from the unit will activate a piercing 95/105 dB alarm to alert you to any misuse or removal. 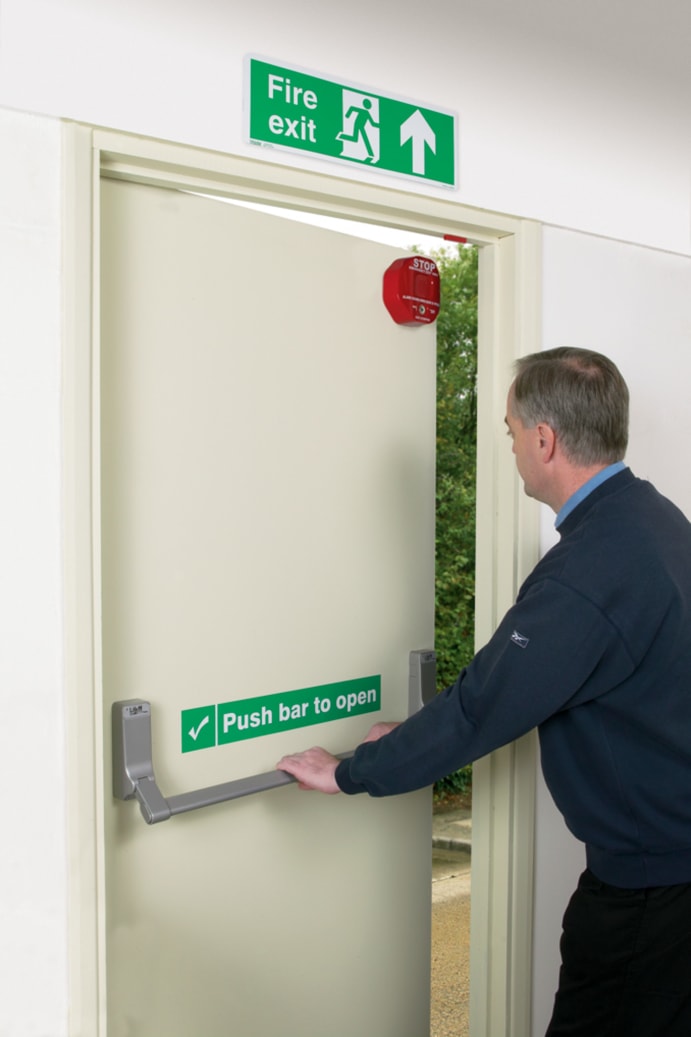 The unit will leave the extinguisher accessible for emergencies and will not interfere in the event of a real fire – the alarm is also convenient in the case of an actual emergency acting as a pre-alarm, helping to alert people in the surrounding areas to the fire before an official alarm has sounded.

The compact design of the UV-stabilised polycarbonate unit means it mounts easily next to a vulnerable fire extinguisher, the Theft Stopper is easy to install and a deactivation cable is supplied for ease of servicing the extinguisher.

Recently transitioning from the Extinguisher Stopper® to the Theft Stopper, the STI-6200 model can be used to protect automated external defibrillators (AED), evacuations chairs and more.

Alan Patmore, Fire & Safety Office for the Luton & Dunstable Hospital, said: “Having fitted the Theft Stoppers we no longer have any equipment being stolen over holidays, weekends and nights. Anybody wanting to protect extinguishers will certainly find value for money by using the Theft Stopper.”

The Mini Theft Stopper® is an inexpensive yet highly effective way to protect fire extinguishers and a wide range of other life safety equipment from theft. The device is compact, highly effective and extremely versatile – it does not interfere with legitimate operation in any way.

The simplicity of the design contributes to a high degree of reliability utilising tough ABS construction; with a magnetic reed switch activation for cabinets and display cases, and unique steel contact clip activation for fire extinguisher pins, and other free-standing equipment.

Alarm Fatigue in the UAE