21st September, 2020: Construction sites without the correct protection can potentially be very dangerous places, especially when it comes to head injuries. This is why Headway – the brain injury association and leading safety manufacturer Centurion are working together to raise awareness of using and maintaining hard hats while on site.

Together, the organisations have partnered to create Hard Hat Awareness Week which runs from 21st-27th September and will see a series of activities designed to drive awareness of brain injury and encourage best practice around safety equipment. 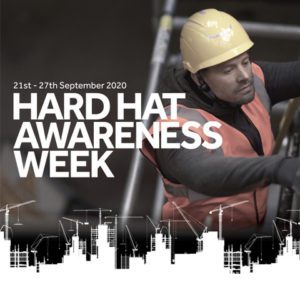 The results of a survey conducted by the brain injury charity which explored the use of hard hats in the construction industry and understanding of concussion were published at the start of the awareness raising week.

Shockingly, statistics revealed that among those who experienced a head injury at work:

More worryingly, 15% of 486 respondents stored their hard hat in an unsuitable way, such as in direct sunlight or extreme temperatures, whilst over half (58%) painted, marked or applied decals or labels to their helmet which could cause a chemical attack and reduce its durability.

Almost a quarter (24%) were unaware that exceeding the expiry date of a hard hat can reduce the level of protectivity and 28% did not know where to find their helmet’s expiry date or were unaware it even had one.

Peter McCabe, Chief Executive of Headway, said: “Brain injury is more common than you think, and its impact can be life-changing for both the injured person but also their wider family. Ensuring your head protection is worn and cared for correctly is key to remaining safe.

“To all those working on site or in the construction industry, we urge you to always wear your hard hat.”

Chris Tidy from Centurion Safety Products said: “We want people to understand the devastating effects of brain injury. It’s not just the individual that’s impacted, a brain injury can change the lives and futures of partners, family members and friends.

“Centurion and Headway want to drive the awareness of brain injury but also help wearers of safety helmets and hard hats to understand the possibly lifesaving piece of PPE they are wearing.

“We would like a week dedicated every year going forward for all wearers to audit their safety helmet or hard hat for signs of wear and tear, make sure it is in date, remove any unchecked stickers and sanitise/clean this piece of safety equipment whilst in a safe environment. We would like to challenge other safety helmet manufacturers to get involved and publicise this event going forward.

“We also want wearers to understand that 30% of head injuries occur from slips, trips and falls from the same level where the wearer could suffer a rotational injury. We would like to educate the wearer on the risk of concussion and give them a concussion recognition tool that will help them to understand the early warning signs, showing the person may be at risk so they can seek medical attention.”

Headway and Centurion are holding a Hard Hat Awareness Week raffle, the proceeds of which will go towards helping Headway deliver its frontline services and improve life after brain injury.

Several leading names in the construction sector have already pledged their support for the initiative including amey utilities, HSE network, Skanska, Costain, Strabag and CHAS and everyone within the industry is invited to take part by sharing images of their audited hard hats on social media using the hashtag #hatwise.

*Fundraising, payments and donations will be processed and administered by the National Funding Scheme (Charity No: 1149800), operating as DONATE. Texts will be charged at your standard network rate. For Terms & Conditions, see www.easydonate.org

Liam Jones* was working as an overhead linesman when a metal bar fell and hit him on the head, causing what could have been a life-altering injury had he not been wearing his helmet.

Here, he shares his story as part of Headway and Centurion’s campaign to raise awareness of using and maintaining hard hats while on site.

35-year old Liam was working on an overhead line job late at night. It was dark and he and his team had been working all day long.

Liam was working on the ground while colleagues were installing a screw-in pin above him. Accidentally, the pin, weighing 1.6kg and measuring 14 inches, fell and hit him on the head.

He said: “Although using hard hats is second nature, seeing my hard hat perform so well and protecting me in a real situation gives me huge confidence in my PPE.”

Liam was left with minor bruising on his head, but he says that without wearing his helmet, things could’ve been far worse.

“The doctor in A&E was thankful I was wearing a hard hat. I feel very grateful to be alive. In my mind, there’s no doubt that the hard hat saved my life or at least from serious injury.”

Headway is a brain injury charity dedicated to promoting understanding of all aspects of brain injury and providing information, support and services to survivors, their families and carers. In addition, Headway campaigns to reduce the incidence of brain injury.