In order to begin to prevent injuries to the respiratory system it is vital to understand and realise what level of airborne particulate or other elements are present in the working environment and of what type.

Sampling criteria based on health effects

In an attempt to provide consistent and internationally acceptable definitions for health-related aerosol fractions, recent reviews of these concepts have agreed the following three relevant fractions for occupational use: inhalable, thoracic and respirable.

This is defined as the mass fraction of total airborne particles that are inhaled through the nose and mouth.

This fraction is relevant, for example, for biologically active particles such as bacteria, fungi and allergens. Exposure to these particulates can lead to inflammation of sensitive membranes in the upper respiratory tract, nose and throat (i.e. hay fever, rhinitis). In addition, particles such as nickel or wood dust can cause serious local conditions such as ulceration or nasal cancer.

This fraction has an aerodynamic diameter of less than 30μm. It is defined as the mass fraction of inhaled particles that are able to penetrate the respiratory system beyond the larynx.

This fraction is relevant for particles that may provoke a response in the tracheobronchial region such as chronic bronchitis or bronchial carcinoma (e.g. chromium)

This fraction as an aerodynamic diameter less than 10μm. It is defined as the mass fraction of inhaled particles that is able to penetrate the respiratory system as far as the alveolar region.

This fraction is relevant for particles that are able to deposit in the alveolar region and lead to pneumoconiosis, alveolitis and pulmonary carcinoma (e.g. antimony, iron or tin dust)

In the case of fibrous particles, the definition of respirable is based on shape as well as the aerodynamic diameter. For asbestos, long, thin particles are thought to be more hazardous than short, fat ones. This is due to the fact that long, thin fibres are capable of penetrating deep into the alveolar region of the lung and, having become lodged there, are difficult to remove by the lungs’ defence mechanisms.

For this type of solid particulate, selection of the respirable fraction is carried out after the fibres have been collected on a filter. They are first sized against the following criteria:

A number of variables affect the airborne concentrations of contaminants in the workplace. Some of the most important include:

Because plant, process conditions and general ventilation characteristics are likely to vary from day-to-day or to display a seasonal pattern, it is not advisable to make assumptions about long-term exposure patterns based on a single estimate of contaminant concentrations at one point in time.

The situation becomes much more complex when the actions and behaviour of employees is considered. At its simplest, an individual’s exposure will depend on how close he is to the various sources of contamination and the length of time spent in a contaminated area. This may vary from day-to-day and from one worker to another, although their jobs may appear to be similar in nature. When an employee has direct influence on the process or the number or nature of contaminant sources, the situation is further complicated as, for example, in manual handling operations such as scooping dusty materials or pouring liquids.

The main variations which need to be considered include:

One must also take into account the possibility of respiratory allergies within and outside of the working environment that could have a profound effect on employee’s respiratory health.

Hayfever – Sufferers react when exposed to the pollen of a particular plant, perhaps grass or tree. Most pollen grains are more than 10μm in diameter and settle in the upper part of the respiratory tract. The effects are felt in the nose and throat and therefore the symptoms developed are rather like a cold. The immune system produces antibodies to a substance in pollen and the body reacts as it does whenever antibodies are produced in the upper respiratory tract – sneezing and running nose and eyes.

Asthma – The house dust mite is a tiny insect that is found wherever people live and is hardly visible to the naked eye. Its droppings are inhaled into the mid-area of the lungs – the bronchi. The most common form of asthma is an allergy to these droppings, but there is similar conditions arising from allergens to many particles of similar size. On exposure to the allergen, muscles of the bronchi tighten up so that it is more difficult for air to pass through them. The person wheezes and becomes short of breath.

Particles less than 10μm can reach the smallest chambers of the lungs, the alveoli. Allergic alveolitis is inflammation of the alveoli because of an allergen. This interferes with the normal process of gas exchange in the alveoli. A few hours after exposure, the subject will wheeze and develop fever.

A common form of allergic alveolitis is farmer’s lung. If hay is stored when it is too wet, it will grow various bacteria and fungi. A few months later, in winter, it will be taken from storage as feed for stock animals. When it is disturbed, the mouldy hay gives off enormous numbers of micro-organisms and the fungal spores they have formed.

The spores are about 2μm across and would reach the alveoli. They do not start to grow and cause infectious disease; instead the immune system responds to them, as in Hayfever or asthma.

The alveoli are, of course, very delicate. An allergy affecting the alveoli is more serious than one that affects the nose and eyes. Hayfever is rarely life threatening, but, for example, there are about 10 deaths in the UK each year from farmer’s lung.

There are many agricultural activities that create dusts of animal or vegetable origin. Depending on particle sizes, these can cause asthma or allergic alveolitis. Examples are dusts from grains (especially barley), poultry, fur, feathers and mushroom compost.

Legionnaires disease – Air conditioning systems in buildings have humidifiers to add water vapour so that the air is not too dry. Some older systems have pools of stagnant water in which micro-organisms can grow especially if maintenance is poor. Legionella pneumophila sprayed into the air can cause a form of pneumonia, which is a true infectious disease.

Many other micro organisms will grow in humidifiers. The result is that those exposed to the humidified air develop an allergic alveolitis known as humidifier fever, although this is now less common due to improved air conditioning technology, which has removed the need for cooling towers and humidifier ponds.

PPE is a control measure that is the least desirable for the operative, and is often inappropriate and ineffective. By using PPE there is no attempt to reduce or eliminate the hazard and therefore it should only be considered a last resort.

Under certain circumstances, however, PPE may be deemed as necessary:

The key issues in the selection of PPE are:

However, it is important not to lose sight of the fact that PPE is never the ideal solution for protecting workers from the harmful effects of chemical agents. Remember that the effectiveness of the control measure depends solely on the worker using it properly, and there are a number of factors that can prevent it being used effectively:

It is unacceptable to require employees to be encumbered by PPE when it is the process itself that should be enclosed, or the hazardous substance that should be eliminated by substitution. Employers often take the attitude that the hazard is inevitable and therefore it is the employee who must endure the discomfort of wearing PPE.

In circumstances where respiratory protective equipment (RPE) is prescribed as a method of control, the employer must ensure it is suitably maintained. This means having it examined at suitable intervals and tested where appropriate. Without this regime the equipment will not protect employees from any uncontrolled hazard to which they are exposed.

You should now be more able to prevent injuries to the respiratory system in yourself and colleagues because you understand a little more about what kind of airborne particulate or other elements are present in the working environment and what damage they can do to different parts of the respiratory system.

Published: 10th May 2008 in Health and Safety Middle East 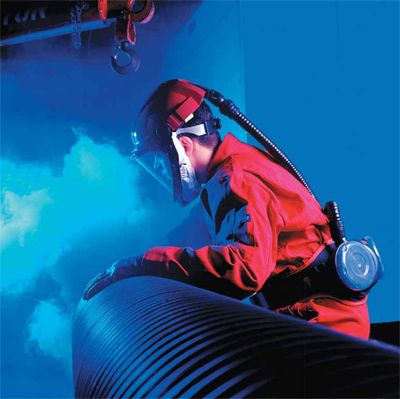 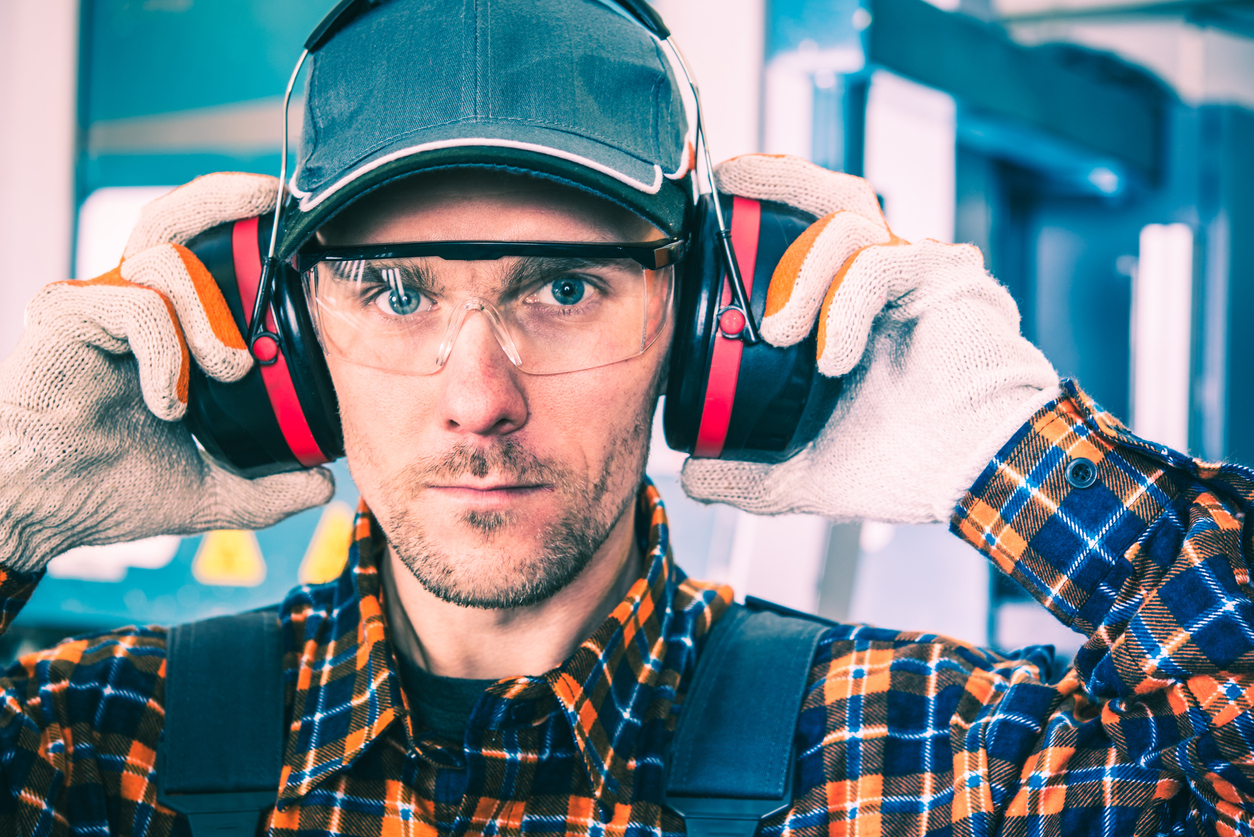