As confined spaces continue to be a leading cause of major workplace injury and fatality, more and more companies are trying to eliminate the human risk present in confined space inspection. How do they propose to do this?

By sending in remote-controlled drones to inspect and monitor any initial hazards. But can a machine really complete a thorough enough analysis of the hazards present, when some of them can be as small as cracks? And just how much can we expect from a single drone team? One such company exploring the limits of this technology is MRS Training & Rescue.

In this article, Operations Manager Paul Antcliffe aims to set the record straight on the successes and failings of drone inspection, and what it could mean for the future of safety management.

What are confined spaces?

The Confined Spaces Regulations 1997 give a definition for the term confined space as “any place, including any chamber, tank, vat, silo, pit, trench, pipe, sewer, flue, well or other similar space in which, by virtue of its enclosed nature, there arises a reasonably foreseeable specified risk”.

Specified risks are defined as being one or more of the following:

Conducting industrial inspections in confined spaces is a hazardous task and many workers have been killed from oxygen depletion or from exposure to toxic gases and chemicals. Furthermore, falls from height are the single biggest cause of fatalities in the workplace. Dangers are most acute when workers are operating on scaffolding or using rope access in confined and often dark inaccessible areas.

“an internal inspection drone, with the purpose of reducing putting people at risk in confined spaces”

Where can drones help?

The drone uses cutting edge drone data capture capabilities with a built in dual thermal and a 4K camera side by side providing detailed images down to 0.18 mm/px resolution to spot the smallest of faults. It can take hundreds of images and video footage, using thermal image sweeps to capture video and images. It can also map roadways allowing the information to be converted via software into a detailed report and video footage for the customer, highlighting any anomalies/problems and moving forward into a 3D model image of the surveyed area.

It is designed to conduct internal inspections and can take photos, videos and thermal imaging, creating a detailed report. It has a spherical cage to protect the propellers and component parts from impact and is very stable. It can be operated by the drone pilot beyond line of sight, through walls and past obstacles using robust wireless transmission. The drone is protected by a caged type sphere which protects the drone’s components, the individual pieces that make up the protective cage can be changed if damaged.

The drone battery life is about 10 minutes and so that is approximately the time that can be covered in a single flight. But we have multiple batteries, and it only takes a few seconds to swap them over, so inspections can be broken down into sub-10-minute sections to ensure everything can be captured.

The drone is not ATEX rated so a suitable and sufficient risk assessment must be conducted ahead of any flight to ensure any potential hazards are removed or reduced before a drone is flown into the space. For example, if conducting a flight in a flour silo, the organic compound could cause an explosion if mixed with an ignition source. So, to remove this risk, the silo walls would need to be jet washed, dust removed, and ventilation added. Then the drone could fly safely.

“human element is still required. Pilots are needed to fly the drones and a skilled team to take the data captured”

The drone cannot operate in high water due to electric components and the possible submersion of the drone, so as part of the risk assessment you would need to ensure there was sufficient height above the water to ensure the drone would not get wet due to down draughts caused by the propellers.

Is a human element still needed?

Human element is still required. Pilots are needed to fly the drones and a skilled team then needs to take the data captured, further investigate it, document findings, and create reports.

Will it ever be fully remote?

Unfortunately, there is always a risk something could go wrong. Perhaps the drone gets stuck on metal work and cannot fly off. Or the battery dies before the drone flies out from the space. Because working in and rescuing from confined space is our area of expertise, we can send specialist teams in to retrieve the drone in such instances.

However, although it is unlikely this will be fully remote soon, technology is advancing all the time, so you never know. Thomas Watson, chair of IBM said in 1943: “I think there is a world market for maybe five computers”. At the time, this may have been true. Retrospectively, it’s hilarious.

Are there other applications?

External inspection drones are used in many difference industries already such as chimney inspections, agricultural yield calculations, as well as by the police and other emergency services.

We only use internal inspections drones, but they do have thermal imaging capability so could be used in a search and rescue environment too.

Many industries could benefit from drone technology. We can use drones to check for leaks and corrosion. For example, if there is a tube leak in boiler – a drone can spot it. Or if the customer suspects there might be a leak but isn’t sure where it is, again a drone could find this. If there is corrosion in a tank, a drone can spot it before putting people in.

We have used the drone in a gypsum mine that had been previously classed as a no access area as it had fallen out of use. But the company wanted to look at using it again so the drone was able to fly in and inspect the tunnel and detect any falls of ground and water that could cause injury to people entering the space.

And we have used the drone in a culvert. Rather than engineers walking the length of it and inspecting it, a drone was used instead which identified areas severely blocked with debris as well as deterioration of concrete in the roof exposing the metalwork.

We have also used the drone in a sugar silo to inspect the underneath of it, checking for cracks and defects. This avoided the need for expensive scaffolding and illuminates the need for workers to work at height, thus removing the fall from height hazard/risk.

Can drones be certified?

As this is an internal inspection drone, no formal qualifications are required. However, all MRS Training & Rescue drone pilots are trained to operate drones in the A2 Subcategory under the new Unmanned Aircraft Systems (UAS) regulations. They are also OFQUAL Level 4 certified and regularly train in our purpose-built confined space training galleries. (www.mrsl.co.uk/drone-inspections)

We are also certified as an Operational Authorisation from the CAA (Civil Aviation Authority) and have completed the GVC (General VLOS Certificate) training, so our pilots are future-proofed.

In addition, we have our own drone policy, risk assessments and operator’s manual approved by the CAA. As part of these procedures we:

The drone can be maintained easily and has an annual service by the supplier.

Our confined space experts would conduct an initial site visit and from this would identify local risks and controls that would form the risk assessment. We would then draw up a flight plan and a simple schematic of the work the drone will do that is used during the flight. This will include things like:

We recently used our drone to inspect a series of culverts. Previously these had been done by two teams totalling six people. A three-person team who walked through the culverts and tunnels, taking pictures and videos to use in the report they then collated. And a further three-person rescue team on standby in case of an emergency.

Using a drone removed the need for people being in this hazardous environment as well as reducing cost and time.

Is this the future of safety?

We now can stop and think before we enter a confined space. Can this job be done by a drone? Drone applications and their potential use grow every day. From an engineering perspective many of their capabilities sit within inspections we are finding they improve safety immensely. Some of what engineers and inspectors do is quite dangerous work. The less time that needs to be in a confined space, using ropes, harnesses and pulleys or inspecting internal bridge sections, the better. A drone can half the amount of dangerous work a person may normally engage in which is a great outcome for all involved. Other than the obvious safety benefits, drones free up a person’s time to think strategically, giving them the opportunity to gain a different perspective. Traditional plans and surveys delivered by on-the-ground crews can only provide so much. Once we get a drone into the space the options open up. For example, we could create a 3D model for a site, and a detailed report on the flight inspection findings. 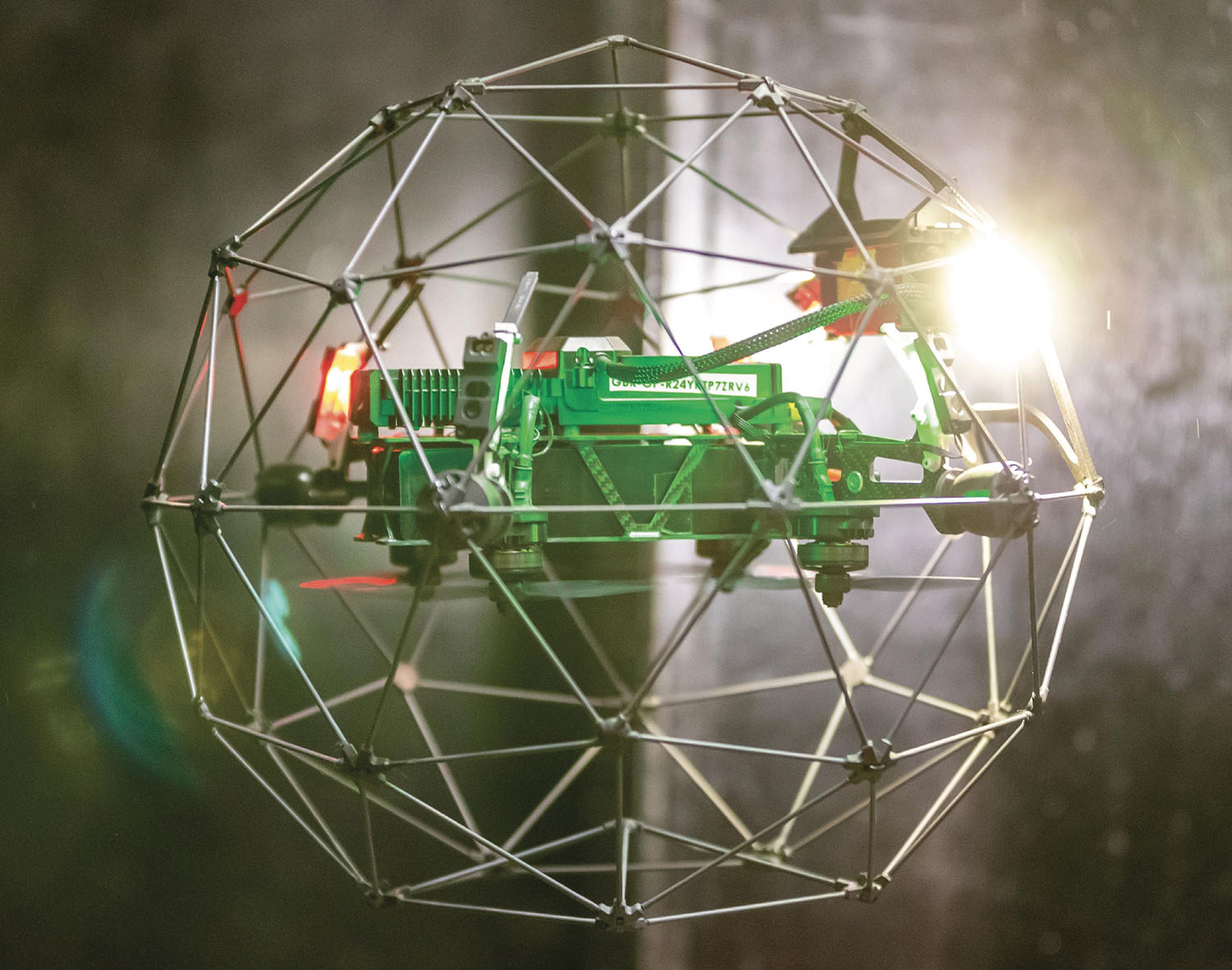 Get ready as we take you to one of the most exciting and valuable safety and security events in the region. 💥

From gathering global industry leaders to connecting you with thousands of exhibitors and solution providers, we've a lot for you at Intersec 2023. 🌐 Don’t miss out!